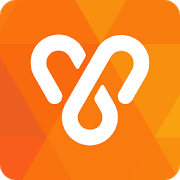 Call up to 7 friends at once, anywhere, for free. Create and share videos on any device or platform.

ooVoo is a video chatting and messaging app that was launched back in 2007. It was one of the first apps that introduced the feature of video calling to the internet. ooVoo first launched its application for Microsoft Windows and then gradually released its applications for Android, iOS, Mac OS X, Windows Phone, and Facebook.

ooVoo allows its users to communicate with each other through free messaging, voice, and video chat. ooVoo soon introduced its high-quality video and audio call technology with which up to twelve participants simultaneously can participate in HD video calls and desktop sharing.

ooVoo ia relatively easy to use than most other video calling applications and softwares and the quality of video chat was much better than most of the other apps. ooVoo also introduced the desktop sharing feature that allowed the users to share their desktop screens. Soon, ooVoo also introduced international phone calling feature that let the users to call other people on their phone numbers using their credit.

When ooVoo was available then it used to be one of the best video chatting apps available providing all of the features for free with the best HD video calling.

ooVoo has won numerous awards including a Mobile Excellence Award for Best Social Community in 2016 and the Tabby Award in the Social category in 2013.

Currently, ooVoo is available for Android and iOS providing the users with the same free high-quality Video Calling and messaging. ooVoo offers group video call with up to 8 people at a time and it also all the basic features that you find in any other messaging app such as sending videos, pictures, text and more!